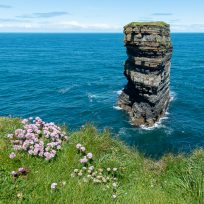 Taking the opportunity of the Republic of Ireland hosting the first ESO Council meeting after Ireland became the 16th member state of the European Southern Observatory (ESO) we visited the Irish capital Dublin over a long weekend in early June followed by an 11 day and 2700 km roundtrip through Ireland and Northern Ireland.

The Council meeting ended with an exclusive late-afternoon excursion to the impressive Newgrange neolithic passage tomb which was built some 5000 years ago and provided a unique introduction to the many pre-historic sites we would encounter on our later tour.

Our round trip started on the next day in Dublin with crossing the Wicklow Mountains and visiting the monastic settlement of Glendalough. We then quickly made our way to the south-west end of Ireland to join the Wild Atlantic Way following the west coast of Ireland from South to North passing many of the highlights of Ireland, including the Ring of Beara, the Ring of Kerry, and the Dingle Peninsula.

Further to the North we explored the unique landscapes of the Burren concluding a rainy arrival day with a beautiful late sunset at the Cliffs of Moher. Next major stops along the Wild Atlantic Way were the Connemara region around Clifden and the most-western point of our tour, Achill Island.

Achill Island with its rough coastal landscapes and few but welcoming people became our most favorite spot on this Ireland trip. The fact that we had to stay an unplanned extra day and night because of problems with our car was easy to get over.

However, this also meant that we had to compensate on the next day with an extra-long drive with a new car to Northern Ireland to still be able to visit the famous basalt columns of the Giant’s Causeway as planned. Our effort was rewarded by a late-evening visit to this touristic hot spot with special light between two heavy rain showers and almost no other tourists around us.

The last day before our departure from Dublin airport was fully dedicated to an extended visit to Birr Castle right in the centre of Ireland. Birr Castle is the home of the Leviathan of Parsonstown, a telescope which was built in 1845 by the 3rd Earl of Rosse and with a mirror diameter of 183 cm remained the largest telescope in the world for 70 years.

Enjoy the pictures and the panoramas from this trip! You can further follow our detailed route in the following map:

1 thought on “Roundtrip through Ireland”