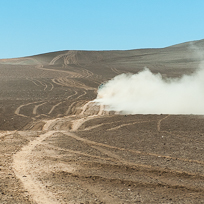 This picture gallery is a selection of pictures from a five-day tour through the chilean Atacama Desert with the geologist Professor Guillermo Chong from the Universidad Católica del Norte in Antofagasta.

In the week after Easter our small group of six people in three 4×4 cars headed north from Antofagasta to explore the Chilean Atacama Desert. Focus of the excursion was the geology of this unique region between Antofagasta and Arica and from the Pacific coast to the Altiplano. We further experienced the rich history of the region from the golden age of natural sodium nitrate mining in the late 19th and early 20th century until today’s large scale mining operation for all kinds of natural resources. Under the most competent guidance of Guillermo the geology and history of the Atacama Desert came to life for us. Distances in the desert are large and when we returned to Antofagasta after five days we had spent 2500 kilometers on highways and dirt roads.

Enjoy the pictures and follow our tracks on the map!