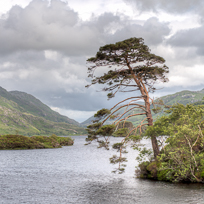 This picture gallery is a selection of pictures from a ten-day and 1450-miles roundtrip through northern Scotland starting and ending in Edinburgh.

The SPIE conference on Astronomical Telescopes and Instrumentation was held in Edinburgh this year – a can’t miss opportunity for us to visit Scotland for the first time. After the week of the conference in the City we rented a car and took off towards the North with our first stop in Stirling, the “Gateway to the Highlands”. In the following week our overnight stations in the Scottish Highlands were Oban, Portree on the Isle of Skye, Ullapool, Durness, John o’Groats, Inverness, and Dinnet before returning to Edinburgh. Our daily tracks can be followed on the map below!

We really enjoyed the diversity of this trip: continuously changing coastal and mountain landscapes, countless lochs, national parks with neat hiking paths, picturesque villages, old castles and ruins, local food, local history, quickly alternating sun and rain, and friendly, welcoming people. The narrow cross-country roads of the Scottish Highlands force a slower pace and allow to enjoy the surroundings once we got acquainted with the left-side driving and the passing routine for oncoming traffic.

Isle of Skye was for sure one of the highlights of the trip and we were happy that we had planned for two nights there. Skye is like having all the highlands on one (not-so-small) island and our roundtrip there showed us many of the features listed above. Cairngorms National Park towards the end of the trip was a nice surprise because we had initially not planned to spend time there but followed the tip of our landlord at the B&B in Inverness. By this the Muir of Dinnet with Loch Kinord became the beautiful finale of our trip.

Enjoy the pictures and the two 360° panoramas at Neist Point and Polin Bay near Kinlochbervie.