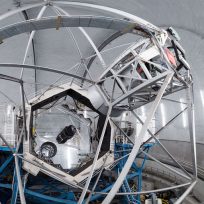 A few pictures from a visit to the Big Island of Hawai‘i and the W. M. Keck Observatory in June this year.

My colleagues from Keck Observatory had invited me to serve on a review of Keck operations as review board member. The review primarily took place at Keck Headquarters in Waimea. But the agenda also included an exciting visit to the two Keck telescopes (Keck I inside panorama, Keck I inside) on top of Manua Kea volcano at 4200 meters altitude.

On my free day before returning to Chile I tried to take a helicopter flight with “doors off” from Hilo to photograph the actual lava flows in Hawai‘i Volcanoes National Park.

Unfortunately, both attempts in the morning and afternoon failed because of bad weather with heavy rainfalls. Between the flights I visited the National Park which has considerably changed since my last visit in 2005 due to the 2008 eruption in the Halema‘uma‘u crater. I enjoyed the Crater Rim Drive and a few short hikes. Unfortunately, the cloud layer lowered even further in the evening so that there was not enough visibility to see the lava glow from Jagger museum overview.