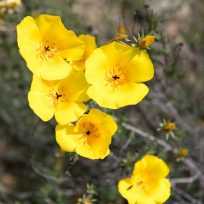 After the heavy rains this winter in the North of Chile an extraordinary blossoming of the Atacama Desert could be expected.

A quick two-day trip to the region between Huasco and Totoral early August confirmed that the “Desierto Florido” had already started and that this would probably become the most spectacular event of the last ten years. We had never visited the Desierto Florido in its early phase and I was surprised how different it looks to what we had seen before e.g. in 2004. The early phase is dominated by individual plants either spread over the desert or concentrated in narrow ravines. The dominant colours of the early flowers are yellow and white.

We returned four weeks later in early September to visit the same places and it looked very different. The early flowers had mostly disappeared and now the desert was covered in carpets of blue and purple flowers. In particular the purple fields of the “Patas de Guanaco” dominate the landscape left and right of the Panamerican highway between Copiapó and Vallenar. Further we found at several places near Carrizal Bajo the spectacular “Garra de León” (the lion’s claw), a plant endemic to Chile with long stalks and large bright red flowers.