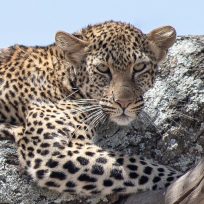 After our first trip to Southern Africa in 2012 we always wanted to explore another part of Africa. Our choice fell on Tanzania not least because of the famous Serengeti National Park with whose pictures and documentaries we grew up and which shaped our picture of Africa. In February we traveled for 19 days with our guide Sebastian and spent 2750 km in our reliable Land Cruiser exploring Northern Tanzania between Mkomazi National Park to the East and Lake Victoria to the West.

Our round trip started at the foot of cloudless Mount Kilimanjaro from where we headed East to the less well-known and therefore quiet Mkomazi National Park which turned out to be the perfect introduction to the world of safari with long early-morning drives on dirt roads for animal spotting, boxed lunch in the shadow of acacia trees, tented luxury camps with three-course menus and campfires at sunset.

We continued westwards to Arusha National Park, Tarangire National Park and Lake Manyara National Park to encounter a surprising diversity of wild animals and beautiful landscapes. Near Lake Eyasi we had memorable encounters with the Hadzabe bushmen who allowed us to join their daily bow-and-arrow hunting routine and the Datoga blacksmiths who produce arrow heads also for the Hadzabe in exchange of acacia honey.

The nearby Ngorongoro crater is the main attraction of the Ngorongoro Conservation Area. Its caldera forms a natural corral of some 20 km diameter for the countless animals who live inside quite well-protected from poachers. Many enterprising Maasai tribes live in or nearby the conservation area and happily provide the numerous passing tourists insight in their traditional lifestyle including their dances and jewellery.

During the wet season from December to April most of the larger animals of the Serengeti National Park come to its southern part to give birth and raise their offspring before following again the rain clouds to the North. Seeing so many large animals like lions, elephants, giraffes, zebras, hippos, antelopes, monkeys and many birds with their little ones left a special impression on us; watching the birth of a gnu baby will always remain special in our memories of this trip.

We had secretly hoped to see a cheetah on this trip – the only large african cat we had not seen yet. We would have never thought that we will count a total of seven at the end of our trip – most of them in the central part of the Serengeti National Park where we also could extensively observe a young leopard spending the day on the branch of a dead tree. Having seen the wonders of nature in this unique park we had many times to endorse that the Serengeti Shall Not Die.

Leaving the Serengeti National Park through the western corridor we eventually reached Speke Bay at Lake Victoria – a paradise for birders on the shore of a gigantic lake. A visit to the village of Mabulugu provided an interesting impression of the daily life of a fishermen’s village. After Lake Victoria we headed North-West to the northern part of the Serengeti National Park, had a quick look at the Mara River where a few months later millions of gnus and zebras will cross during the big migration.

After another long day’s drive we eventually arrived at Lake Natron, a large salt lake inhabited by flamingos and surrounded by a rift and numerous volcanoes including the stunning Ol Doinyo Lengai, the Mountain of God whose mudflows conserved several hundreds of hominid footprints from some 5.000 – 19.000 years ago.

After 19 days and 2750 km of African massage we concluded this amazing trip at Kilimanjaro Airport and made us on our long way back to Chile full of new impressions from this beautiful and interesting country. Enjoy the pictures and the panoramas and movies from this very special journey.

The complete trip was tracked by GPS and you can follow our paths in great detail in the following map:

1 thought on “Safari through Northern Tanzania”