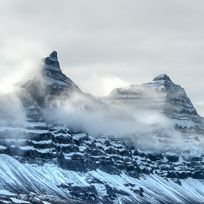 These picture and panorama galleries are a selection from our three week-tour to Iceland and East Greenland in August and September last year. After we had circled Iceland by car already in 2010 we concentrated this time on some of the areas we had to skip like the highlands around Kerlingarfjöll and Landmannalaugar. Of course we rediscovered a lot of Iceland’s highlights including its geysers, waterfalls and glaciers. too.

Nevertheless, Iceland was only the starting point for our trip to the Scoresby Sund in East Greenland. After a short flight from Reykjavík to the Nerlerit Inaat (Constable Point) Airport near Ittoqqortoormiit we entered our ship, the Ópal. With this beautifully restored two-masted schooner from 1951 and under the guidance of Rolf Stange we then explored for one week the fantastic landscapes of the largest and longest fjord system in the world, the Scoresby Sund. Traveling late in the Arctic summer was rewarded by excellent weather during long days, several sightings of Polar Lights during the short nights and an abundance of gigantic icebergs floating in the fjords.

Enjoy our pictures and panoramas! Rolf also provides a travel log in german and pictures from the trip. The map below shows the GPS track (thanks to Erich Petri) of the trip with the Ópal and our hikes at land. Picture locations are indicated in red, Panorama locations in yellow.